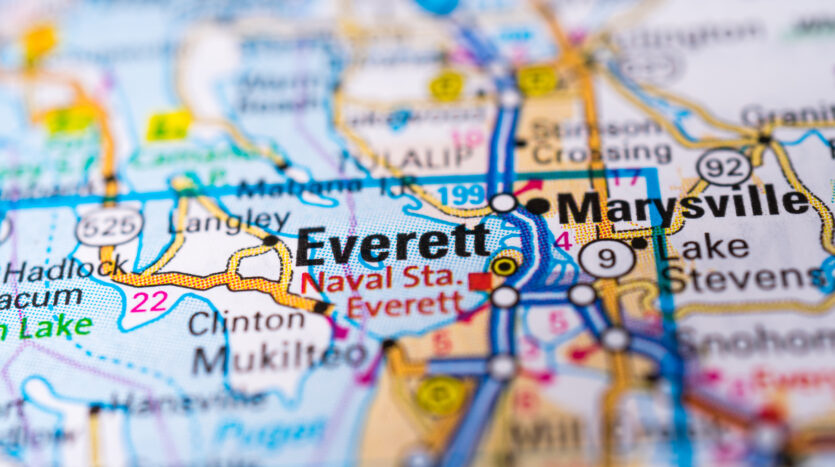 Everett on the map background

Moving to Everett? Check Out These Neighborhoods

Everett is a beautiful coastal city in northern Washington and a great destination for families or nature-lovers looking for a new place to call home. Everett is the central city and the most populous location in Snohomish County, Washington. The U.S. Census Bureau estimates the population of Everett to be 111,475 as of July 2019. The average age of Everett citizens is 36.1 years old. The median household income in Everett is $60,769 as of 2019, and 23.3% of the population has completed a bachelor’s degree or higher education.

Everett and its surrounding region have a rich and diverse history, stretching back centuries to the time when the region was inhabited by the Coast Salish tribes. The town of Everett was officially established in 1893, and was named after Charles Coby’s son, one of the founders of the Everett Land Company. The same year also saw the arrival of the Great Northern Railway. Historically, Everett’s economy was built on the lumber trade, but today it is led by the aerospace industry, with Boeing alone employing 39,000 people at its Everett facility. Additionally, the Naval Station Everett and the State of Washington provide employment for another 6,000 residents. Furthermore, many Everett residents are employed in technology-based businesses.

Everett offers a wide range of attractions for both its residents and visitors, including the large marina on the West Coast, the Imagine Children’s Museum, Boeing’s Future of Flight, Jetty Island and the Flying Heritage Museum. Additionally, the Port of Everett is undergoing a redevelopment with a $635 million investment, which will include a new hotel, restaurants and luxury apartments. If you’re looking for a new home in Everett, be sure to check out these neighborhoods:

The Bayside neighborhood is a diverse and scenic area that encompasses the waterfront and Port of Everett, the northwest section of the central business district, and a residential area. It features wide streets with an abundance of trees, and boasts beautiful views of the Olympic mountains. Bayside is home to Everett’s first city park, Clark Park, Everett High School, and the Everett Civic Auditorium. The neighborhood features a mix of architectural styles, from grand historic homes such as the Hartley Mansion and Clark Mansion, to smaller cottages that were once home to mill workers. Broadway, on the eastern edge of Bayside, is home to many family-owned businesses, while larger companies are located closer to Everett’s city center. If you’re interested in learning more about Bayside, you can take a self-guided history tour of the neighborhood.

Boulevard Bluffs is a well-established and upscale residential area in Everett, known for its beautiful views of Possession Sound and grand homes. The neighborhood is bordered by Possession Sound to the north, Phillips Creek to the east, Merrill Creek Parkway to the south, and the Mukilteo City limits to the west. The neighborhood is composed of homes along the bay and businesses to the south, the most notable being the Boeing ESRC complex (formerly the Intermec headquarters) which boasts a large, forested campus. Edgewater Park, a small 1.5-acre park located in the northwest corner of the neighborhood, offers amenities such as a basketball court, playground and tennis court. To catch a glimpse of some of the neighborhood’s impressive homes, take a drive down Taylor Drive along the northern end of the neighborhood.

The Port Gardner neighborhood is situated south of downtown Everett and is bordered by Port Gardner Bay/Possession Sound to the west, 41st Street to the south, the Snohomish River to the east, and a combination of Hewitt Avenue and Pacific Avenue to the north. The neighborhood encompasses three distinct residential districts, namely Rucker Hill, Norton-Grand Hill, and Longfellow. Rucker Hill, located in the western part of the neighborhood, is one of Everett’s earliest residential areas and features Rucker Hill Park, as well as the Rucker Mansion, the former home of one of Everett’s founding families. The Norton-Grand Hill district, located in the center of the neighborhood, boasts the W.H. Boner home, a prominent Everett lumberman’s residence, as well as Doyle Park. The Longfellow district, in the eastern part of the neighborhood, is home to the historic Longfellow School.

It’s primarily a residential neighborhood, with many of Everett’s most historic homes. The median home price in the neighborhood may be relatively low, but there are also homes valued at over $1 million in the area.

The Harborview-Seahurst-Glenhaven (HSC) neighborhood is located east of Boulevard Bluffs, and is also bordered by Possession Sound to the north, Pigeon Creek Number 2 to the east, Seahurst/Glenwood to the south, and Phillips Creek to the west. The neighborhood is primarily residential, with more than 900 families residing there. The homes in the area are diverse in design style and value, with construction spanning from the early 1900s to the early 2000s.

HSC offers a variety of private and public parks for residents to enjoy, including Harborview Park, which is located near Possession Sound and spans 8 acres with trails and picnic tables with a stunning view. Another park in the area is Howarth Park, which is located in the upper east corner and is 28 acres in size, it features picnic tables, playground, restrooms, a tennis court, trails and a viewpoint.

The View Ridge-Madison neighborhood is located between Harborview-Seahurst-Glenhaven to the west and Port Gardner and South Forest Park to the east. Its western border is Pigeon Creek Number 2, while Pigeon Creek Number 1 forms its eastern border. The northern boundary is Port Gardner Bay, and the southern boundary is Madison Avenue. The neighborhood has a suburban feel, with most of the area being composed of residential homes. The southeast corner of the neighborhood has a retail block that includes fast food restaurants, banks, and shops along Evergreen Way. The neighborhood includes two elementary schools, Madison and View Ridge, as well as three parks: Johnston-Kelly, Hannabrook, Elm Street and part of Howarth Park. The neighborhood association is active and organizes several community events, including a National Night Out event annually.

Please fill out the form below to contact us.
None of the authors, contributors, administrators or anyone else connected with Utopia Management, in any way possible, can be held responsible for your use of the information contained in or linked from these web pages.
Would you like to get notified when new properties are added to this city?
Sign into your account
Create an account